Chemical Mechanical Polishing (CMP) is undoubtedly the most popular surface finishing technique in the fabrication of planar substrates/wafers in commercial integrated circuits and advanced logic devices. CMP came to prominence with the requirement of miniaturization in printed electronics that uses micro and nano-sized integrated features, such as transistors and conductors.

The Need for Polishing Wafers

The ultra-high wafer flatness is necessary for several reasons. One important functional feature of integrated circuits is the deposited metal layer (typically copper) on substrates. Poor substrate finish results in poor adhesion of metal layers onto substrates. It can be catastrophic as delamination can occur at high temperatures due to overheating and thermal expansion of the substrate. 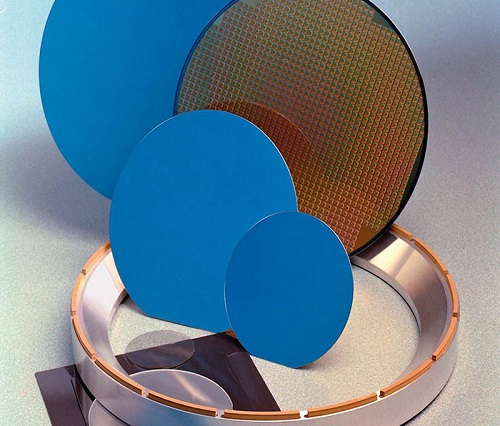 How do CMP slurries work?

CMP involves the polishing of the wafer surface using a chemical slurry and a polishing head. Simply put, it combines chemical etching and mechanical grinding. The abrasive particles gently grind against the wafer surface and loosen the material, which is then etched and dissolved by the chemicals in the slurry. Besides wafer planarization, CMP slurries are also used to remove overfill metals which act as interconnects in integrated circuits.

How to choose the optimum CMP slurry?

How fast the material gets removed collectively depends on the relative velocity of the polishing pad, applied pressure, and the chemical reactivity of wafers with the slurry. The size distribution of abrasive particles in CMP slurries also impacts the material removal rate and defects creation in the wafers.

Given so many process parameters, the fabrication of complex logic devices requires choosing a CMP slurry with just the optimum particle size distribution to boost its polishing efficiency by minimizing surface defect density while achieving optimum planarization. The typical size of abrasive particles in CMP slurries is around 50-250 nm.

The chemical nature of employed CMP slurry also plays a critical role in maintaining the integrity of logic devices. Corrosion-inhibiting solutions should be used to circumvent the onset of chemical reactions that could damage the wafer surface.

The tailored chemistry of CMP slurries makes them stand out undefeated in the power electronics industry. Each substrate has its chemical reactivity and specificity with the slurry. The variety of available CMP slurries, therefore, makes it easy to select a substrate-specific slurry for individual wafer's chemistry. CMP slurries can polish a large variety of wafers that include the likes of sapphire, aluminum nitride, gallium-based compounds, silicon carbides and nitrides.

At Saint-Gobain, we leverage our expertise in particle engineering to precisely control the particle size distribution of slurries, yielding minimal scratching on wafers. Contact our team today to know more about our CMP slurries.