Chemical mechanical planarization (CMP) is a fundamental technology in the modern landscape of consumer and industrial electronics. It provides unmatched topographical uniformity for high-precision electronic wafers, laying the groundwork for downstream etching or deposition processes. Global planar uniformity is pivotal to the success of both semiconducting substrates and subsequent processing stages.

In this blog post, Saint-Gobain explores how chemical mechanical planarization is enabling a new generation of electronics that are improving the quality of consumer goods and adding value to new and emerging markets across the world.

Chemical Mechanical Planarization of Silicon: A Case for CMP

Silicon (Si) is such an effective semiconductor that is has become synonymous with the cutting-edge of modern technology (Silicon Valley). The reason for this overwhelming success comes down to the element’s unique electron structure; it has an even number of electrons in its outermost atomic orbital which allows the element to form flawless covalent bonds with other atoms. This property is atypical of strong electrical conductors, which usually have free electrons in the outer orbital. By doping silicon with deliberate impurities, it is possible to finely-tune its conductive properties so that the material exhibits characteristics between those of an insulator and a conductor. 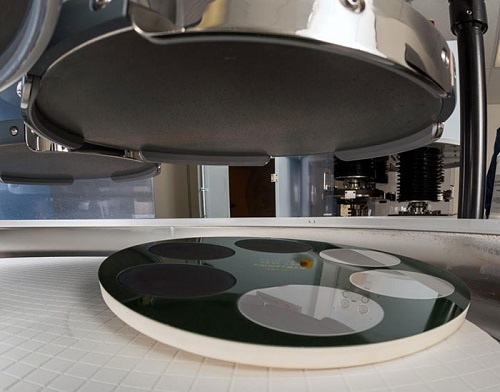 The semiconducting properties of silicon make it ideal for manufacturing diodes, transistors, microelectronics, and much more. Additionally, the abundance of silicon on earth makes it a cost-effective material for crystal growth. This stage, alongside wafer extraction, is typically considered a part of a preliminary market that precedes actual device preparation. The first step in modern electronics manufacturing, therefore, is chemical mechanical planarization.

If you are unfamiliar with the working principles of chemical mechanical planarization, the general idea follows on from abrasive lapping. It exploits chemical interactions between a slurry and a substrate so that an easily removable compound is formed at the wafer interface. Polishing pads then remove this uppermost layer using finely-tuned abrasive particles, leveling the surface for nanoscale levels of uniformity. For a more thorough overview of chemical mechanical planarization, read our previous blog post: CMP Polishing of Electronic Wafers.

Experts believe that, although silicon is not a universal solution for all electronics applications, it is the most likely material to carry the electronics industry into an era of systems-on-chips (SOC) and ultra-large-scale-integration (ULSI). The latter refers to attempts to integrate billions of individual silicon transistors onto a single microchip for next-generation processing; arguably a critical innovation as innovators continue to push the boundaries with regards to power-hungry technologies (5G, IoT, AI, etc.). It relies on a common industry trend in favor of device miniaturization, which demands absolute planarity for optimal system performance. Chemical mechanical planarization is the only polishing technology capable of meeting these stringent conditions.

With careful control of silicon wafer planarity down to the sub-nanoscale, thanks to high-performance chemical mechanical planarization, engineers are constantly collaborating with suppliers to rapidly invent new solutions that meet the dynamic demands of electronic fabrication processes.

Saint-Gobain Surface Conditioning specializes in chemical mechanical planarization of electronic substrates, from silicon to gallium nitride. If you would like to learn more about our unique polishing capabilities, simply contact a member of the team today.